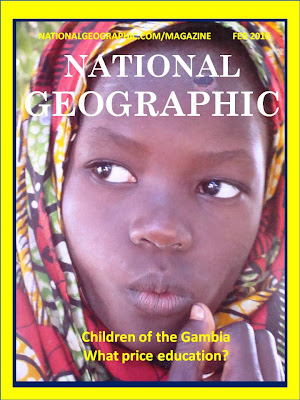 Derek Bok once said: "If you think education is expensive, you ought to try ignorance." Yes, education is expensive, but in spending public money on teacher training, salaries, professional updates, school and university buildings, technology and learning resources, we are investing into the future wellbeing of our own society. My recent trip to the Gambia, one of Africa's poorest and smallest countries, showed me that failing to invest in quality education can be disasterous, and that ignorance is indeed costly on a number of levels.

State funded education in the Gambia covers only lower basic (primary) education. You may have read in a previous post that the government only supplies the buildings, the teachers and the chalk. Anything else must be paid for by parents. They need basic things like pencils and exercise books. I used an old shirt to clean the blackboard during a lesson because their was no board cleaner. The walls need educational posters. Coloured chalk, crayons, text books. All of these are relatively inexpensive to us. To the Gambians they are luxuries. When a child reaches the age of 11, if his parents do not have enough money (and that would be quite a high percentage), that child has to leave formal education. But what can they do next?
I saw many young teenagers simply hanging around on street corners, kicking their heels, trying to earn a living any way they could, selling small items, panhandling, dodging the traffic, living off their wits. Some are lucky enough to go out working on the flimsy fishing boats, but this is a very dangerous occupation. Many of the young girls we saw were tasked to look after their younger siblings. I saw one 6 or 7 year old girl carrying a new-born baby around, tied onto her back with a cloth.
Several times we were approached out on the streets by young men who tried to glue themselves to us in the hope of relieving us of some of our cash. We witnessed the 'Bumsters' working the scene - young males who wait for female travellers to pass their way who they then follow remorselessly in the hope of earning a little money for their 'services' rendered. This is just one of the many humiliating occupations young people can fall into, and believe me, there are some even worse. Unemployment is high in the Gambia, but it would be a mistake to blame this solely on a lack of education. The economic circumstances largely dictate the number of jobs available. It does seem sensible though, to conclude that if the standard of education was higher, and there was more opportunity for children to stay in school for free until they at least reached the end of their teens, that they would be so much better off. It is also inescapable that any society's wealth relies greatly on the standard of its education provision.
So what price education? Well, above is my idea of what this month's National Geographic magazine should be featuring. Yes, it's one of my own pictures, taken of a young girl in the Gambia last week (original here), and the magazine cover is one I created myself, but I hope I have made my point. We all need to care more about how the children of the world are being educated. To my mind, we should invest as much in education as we can afford, because failing our children in their formative years is storing up a shed load of trouble for the future. Let's hope the world wakes up to this fact, stands side by side with the poor nations of the planet and invests more in their future, and in their richest natural resource - their youth.